This film by an acclaimed Japanese director Hirokazu Kore-eda (“After the Storm” (2016), “Shoplifters” (2018)) begins with a scene of a murder in progress. A man kills his boss in cold blood and burns his body. The man – Misumi (Kōji Yakusho) – has previously been in prison for around 30 years for other two similar crimes he had committed. A legal team prepare a case, but since Misumi has confessed, there is nothing much to debate or investigate, and the sentence of death penalty looms over his head. The case of Misumi seems to be an open and shut one, or does it? When a new lawyer Tomoaki Shigemori (Masaharu Fukuyama) takes over the case, he slowly begins to realise that something does not make sense in Misumi’s confession, and the centrepiece of confusion is the motivation of the killer. It also does not help that Misumi starts to change his story of what happened with an astonishing ease and conviction. In Kore-eda’s legal drama, it is interesting to uncover both personal connections to the case and the foreign legal system’s intricacies, but the quiet beauty of the picture can still be found in the slow unveiling of the truth.

END_OF_DOCUMENT_TOKEN_TO_BE_REPLACED

<<<I took care not to reveal any specific spoilers, but some discretion when reading is still advised>>>

Darren Aronofsky’s “Mother!”….I am happy to report that there is no need for some mass panic. “Mother!”  may start slow, but it proves to be a very enjoyable “descent” into sheer madness overall. The initial story here is Him (Javier Bardem) and Her (Jennifer Lawrence) settling into a married life in a country mansion, until one couple (Ed Harris and Michelle Pfeiffer) become their pestering lodgers against the wishes of Her. Ironically, the main flaw of Aronofsky’s psychological horror film “Mother!” is that it is not his first film. If it were, it would have been a masterpiece of achievement. Instead, “Mother!” is just the “recycling” of the elements/tricks present in Aronofsky’s previous films. How does this affect this film, one may ask? Well, Aronofsky’s “recycling” of his ideas reduces the overall effect, impact and unpredictability of “Mother!” by as much as 80%. “Mother!” formula is quite simple to understand. The film is structurally and archetypically “Black Swan” (2010) + touches of some “over-the-top” home invasion and “Rosemary’s Baby” (1968). This is all to it. And, where it is not all, it also incorporates, quite evidently, Aronofsky’s artful orange-colour bursting creativity and philosophy we have all previously seen in “The Fountain” (2006) and biblical/allegorical references. The saddest thing here is that the film is quite entertaining and even brilliant in parts, and the premise would have been completely unforgettable had Aronofsky been more original in his work.

END_OF_DOCUMENT_TOKEN_TO_BE_REPLACED

An inspiring story about an unconventional hero? A graphic tale of the brutality of a war? A touching and believable love story? Mel Gibson can do it all, and, believe it or not – do it brilliantly – all in the same movie. His latest film “Hacksaw Ridge” tells the true story of Desmond Doss (Andrew Garfield), a kind, deeply-religious young man who also happens to be a conscientious objector, enlisting to serve in an army, while having a deep conviction against the commission of violence/murder and would not even touch a gun. Nominated for six Academy Awards, including Best Picture, Best Actor and Best Director, “Hacksaw Ridge” is the kind of a film which one can easily define as “great”: a moving, heart-felt story is matched by a dedicated director and a committed actor who do their work exceptionally well.

END_OF_DOCUMENT_TOKEN_TO_BE_REPLACED 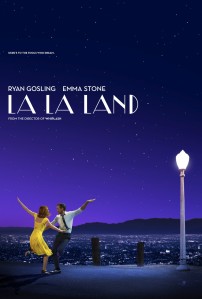 Universally acclaimed, “La La Land” is the kind of a film which could melt the most cynical and toughest of critics. As romantic as it is visually stunning, the main charm of the film lies in its simplicity: a guy, Sebastian (Ryan Gosling), and a girl, Mia (Emma Stone) both dream of professional success in Hollywood, and first find true happiness in each others’ arms before the practical realities of their chosen star professions separate them. With an uncomplicated plot and an absolutely stunning soundtrack, “La La Land” has all the appeal of an old musical, while keeping things interesting and original with notes of modern music, the showcasing of modern technologies and with the demonstrations of a competitive side of today’s Hollywood business. In “La La Land”, Damien Chazelle (director) shows that, in the 21st century, it is still possible not only to make a financially successful old-school musical-comedy, but also to produce a real gem of a movie capable of leaving the audience breathless with its heart strings’ pulling and sheer inventiveness.

END_OF_DOCUMENT_TOKEN_TO_BE_REPLACED

In no particular order:

END_OF_DOCUMENT_TOKEN_TO_BE_REPLACED

© dbmoviesblog, 2011- 2019. Unauthorized use and/or duplication of any textual material present on this website without express and written permission from this site’s author is strictly prohibited. Excerpts and links may be used, provided that full and clear credit is given to dbmoviesblog with appropriate and specific direction to the original content. In using film posters on this site, no copyright infringement is intended by the author of this site.

Books, tea, and a cozy lifestyle

Live life in a livable environment.

Exploration of Literature, Cultures and Knowledge

Scenes from the Morgue

You're ten seconds from watching an amazing film...

A continuation of moviemovieblogblog.wordpress.com...More of my thoughts on movies and pop culture

OF MOVIES AND LIVES

"It's not what you look at that matters, it's what you see."- Henry David Thoreau