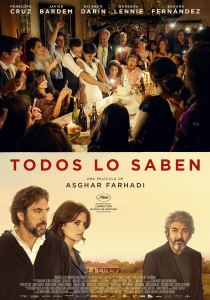 This mystery-thriller comes from the acclaimed director Asghar Farhadi (The Salesman (2016)), and stars such big-time actors as Penelope Cruz (Volver (2006)), Javier Bardem (Mother! (2017)) and Ricardo Darin (The Secret in Their Eyes (2009)). It seems therefore like this film can do no wrong, but, unfortunately, much does not go well in this latest by Farhadi. In this story, Laura (Cruz) travels from Argentina to Spain with her two children to attend her sister’s wedding. She arrives to a quiet Spanish village of her childhood and is happy to strengthen relationship with her large extended family. However, when Laura’s teenage daughter gets kidnapped, familial secrets come dangerously close to being revealed, and the pool of suspects thins to point to some family members. In Everybody Knows, the lead actors’ performances cannot be faulted, and the film has this one-of-a-kind ambiance of traditional rural Spain. The director also admirably tries to explore some curious familial situations. However, the problem with this film is that it does not become a clever mystery-thriller with tension surrounding the kidnapping and some twists to come. Instead, overlong Everybody Knows is all about tedious melodramatic scenes, with the feeling left that the script could have been considered for some local TV series. Even more unfortunately, what “everybody knows” in the story or the big reveal could easily be guessed in the first half of this well-meaning “mystery” movie.  END_OF_DOCUMENT_TOKEN_TO_BE_REPLACED

Yesterday, the Cannes Film Festival 2018 unveiled its list of films to be presented, and Asghar Farhadi’s “Everybody Knows” will be shown at the festival’s opening night. Why it has the the signs to be a great psychological thriller? It comes from the director who crafted Oscar-winners “A Separation” (2011) and “The Salesman” (2016) plus it stars such great actors as Javier Bardem (“Skyfall” (2012), “Mother!” (2017)), Penelope Cruz and Ricardo Darin (“The Secret in Their Eyes” (2009)). The story itself even seems to have something of an Agatha Christie-vibe to it; definitely something to look forward to.

The image used in the site header is a shot from the film Sleepy Hollow [1999] by Tim Burton.

A writer and her reading.

Traditional, Artsy, Genre-Within-Genre: A Little Something for Everyone

One Movie at a Time

One man. Millions of movies.

Reflecting on Mecha Anime, myself, the fandom, and other Anime