Denis Villeneuve’s “Blade Runner 2049” is already gaining the reputation of being a film which breaks new grounds in terms of creating visual splendour on screen, and its plot is a mix of cerebral reflections, unexpected turns of events and low-key, but effective action. While faithful to the world of the original film of 1982, “Blade Runner 2049” is really a film which is one of a kind, and in almost every respect. Here, it has been thirty years since Deckard’s adventures in “Blade Runner” (1982), and now planet Earth is even more depleted of its natural resources. The use of replicants on Earth increased, and now K (Gosling), a replicant police officer, is on the hunt “to retire” the older versions of replicants. However, one of his routine calls “to retire” has yielded important clues which may endanger the calm societal state whereby replicants and humans coexist relatively orderly. His adventure then becomes the one which involves the search for truth, and, like the original film, the preoccupation here is the issue of identity and the correct identification of false and true memories.

END_OF_DOCUMENT_TOKEN_TO_BE_REPLACED

This film from Denis Villeneuve (“Arrival” (2016)) looks promising: visually stunning and well-acted. But, I still have mixed emotions about it all. Will all the action and style here actually take precedence over depth and meaning? We will see. 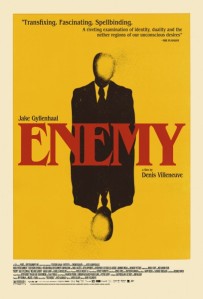 The question of personal identity and its duplication have been fascinating people for centuries. From Edgar Allan Poe’s “William Wilson” to Tchaikovsky’s “Swan Lake”, the theme has been pervasive in almost every form of art. When it comes to movies, such films as “Sommersby” (1993), “Face/Off” (1997), “The Prestige” (2006) or “Black Swan” (2010) may immediately come to mind. However, just recently, scriptwriters/directors have decided to approach the topic more directly, and we now see two films – Denis Villeneuve’s “Enemy” (2014) and Richard Ayoade’s “The Double” (2013) gracing cinema screens in the hope to awe. Although these two movies have their share of differences, e.g., “The Double” is far wittier and more satirical than “Enemy“, these two films share the same theme, and, therefore, it may be interesting to make a brief comparison between the two. Also, besides the “doppelganger” theme, what these two films also have in common is the relative novelty of the directors’ productions. “The Double” is Ayoade’s directional debut and for Villeneuve, ‘”Enemy” is only his second truly mainstream movie after “Prisoners” (2013), also starring Jake Gyllenhaal (“Donnie Darko” (2001), “Zodiac” (2007)).