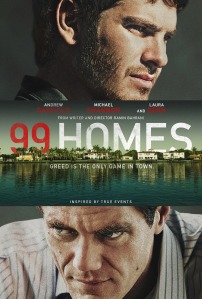 This film is set in the background of the 2008 housing crisis in the US when many Americans lost their homes. Andrew Garfield (Silence (2016)) is Dennis Nash, a single father, who loses his home to the bank and has a chance to get it back if he starts working for a real estate broker (Michael Shannon (The Shape of Water (2017)) who is “responsible” for his misfortune. Directed by Ramin Bahrani, who dedicated the movie to film critic Roger Ebert, the film is a great “housing” drama elevated by the performance from Michael Shannon. 99 Homes explores interesting moral dilemmas and issues, and is so powerful that could rightly be claimed as one of the best films of the year 2014.

If a film starts with a suicide, you know it is going to be an intense ride, and 99 Homes is. In this story, Rick Carver (Shannon) is a ruthless man whose job is to evict people, making them essentially homeless. The stress of being evicted can only be topped by the stress of starvation, and, therefore, one of the biggest horrors of any family may just be a knock on the door away. After Dennis Hash (Garfield), a son and a father to a boy, gets evicted from his family home by Carver, he thinks his worst nightmare is behind him, until he gets closer to the boss of evictions himself, who does not play a fair game, making money out of other people’s misery. The great thing about 99 Homes is that it has many human elements and becomes a personal story, while highlighting the social situation of so many people around the world. In that way, it reminded me of such socially-important movies as The Florida Project (2017) and, to a lesser extent, A Better Life (2011). It becomes easy to connect with the characters in these films, sympathising or empathising with them. But, 99 Homes does not just have a heart, it has a head too. It makes one think about all sorts of moral issues – do morally-reprehensible means justify the end, if that end is one’s personal or one family’s well-being or prosperity? How far is one prepared to hurt one’s neighbour to save one’s own family from ruin? Profit vs humanity, and sentimental attachment/value vs property quantity and price are all dilemmas touched upon in this film.

Another interesting aspect of 99 homes is the way the character of Michael Shannon is contrasted with the character played by Andrew Garfield. They are polar opposites in their beliefs, but they are forced to work together to achieve their desired results, results which are also polar opposites of each other. Power and money-hungry Carver uses Dennis to do his “dirty work”, enjoying his authority and power over weaker Dennis, and Dennis, in turn, wants his family home back and the means to feed his family. Dennis also undergoes some character development under the influence of Carver, and it is especially interesting to watch Dennis’s moral compass shifting. Garfield is great in showing sympathy, but is only so good in the role of desperate Dennis, a role that does not require much screen presence if you work alongside Shannon. He is only good because he too young-looking to pass convincingly for a father and a provider of a family and does not have the necessary charisma to compete successfully alongside Shannon. On the other hand, Shannon, surely, gives a great performance, and should really have been nominated for an Oscar. “Don’t get emotional about real estate”, cynically proclaims his character, and Shannon is such an actor who can create the atmosphere of power and fear with ease without doing anything but stand in a camera frame.

The showdown of 99 Homes may not be as compelling as the movie overall and some scenes are over-dramatised, but 99 Homes is still a near-perfect film: it is both intelligent and emotional, and well-acted (Shannon especially) and powerfully-presented. 9/10 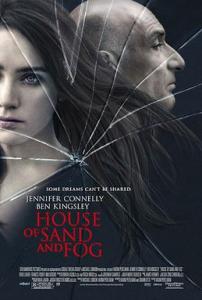 The House of Sand and Fog is a directional debut of Vadim Perelman and a touching adaptation of the novel by Andre Dubus III, a novel that was the finalist for the National Book Award for Fiction. In San Francisco, a government tax mistake causes two people’s life aspirations to collide, and they are forced to battle for one ideal property. Kathy Nicolo (Jennifer Connelly) is a recently-separated woman living in her family home when she is forced to leave her property due to non-payment of business taxes, an error on the part of the authorities. Colonel Massoud Amir Behrani (Ben Kingsley) is a US emigrant from Iran who has high hopes of “making it” in the US with his family and one of the ways to do so is to climb the property ladder. When the home of Kathy is sold through an auction to Behrani for a ridiculously small price, the drama heightens and both parties feel justified to employ extraordinary measures to secure, what they believe, their right and future happiness.

Few things in life are more important than a roof over’s one head, and if that roof also represents the fulfilment of the American Dream, then it becomes even more important. The great thing about The House of Sand and Fog (as about the novel) is the fact that the audience understands the positions of both Kathy and Behrani, and can sympathise with both. Kathy unjustly lost her home, but Behrani also has done nothing wrong and simply wants the best for his family. He is a hard-working man who, even though he was the man of importance in his country, is now forced to work in menial jobs (road construction and shop assistance) so that his family lives in comfort according to his previous societal standing. Kathy’s former home represents to Behrani the last chance for his family to succeed in the US. Some will view his situation differently and will be right, but when Colonel Behrani says “why should I be penalised for [the authorities]’s incompetence”, we can understand his frustration, even though it is also true that he wants to build his happiness on the unhappiness of the other (Kathy). It is interesting that for both Kathy and Behrani the bungalow by the sea has some sentimental value. It is Kathy parents’ home, and, for Behrani, the house reminds of a home the family once had on the Caspian Sea.

At the beginning of the film, there is a barely perceivable drama, but it slowly builds up when Kathy teams up with Sheriff’s Deputy Lester Burdon and they both try to avenge the wrongdoing. The last thirty minutes of the movie is rather different from the rest of the film because, by then, the film gained much pace and things start to escalate. In that way, the director ensures that the film has powerful nostalgic or melancholy elements, but is also psychologically intense when presenting key drama scenes.

The House of Sand and Fog stars the absolute master of acting – Ben Kingsley, and he is the very perfection in this movie in the role of Colonel Behrani. For someone who once portrayed Gandhi (1982), Kingsley is comfortable in the role of dignified men who may have been unjustly wronged, and his performance in the film is excellent. The same could be said of Shohreh Aghdashloo, who acts the part of Colonel’s wife, and both were nominated for an Oscar. Connelly is also a good choice to play Kathy. Connelly was previously cast in a traumatic role of Marion in Aronofsky’s Requiem for a Dream (2000), and the role of troubled Kathy here is not too far off from that of Marion in Aronofsky’s movie. The only weakest link in the film is Ron Eldard in the role of Sheriff’s Deputy Lester Burdon. It seems that his acting only belongs on the set of a day-time TV soap opera and most of his scenes are melodramatic and feel forced.

When watching The House of Sand and Fog, there is a feeling that Vadim Perelman, director, is a bit of perfectionist. Maybe that is the reason the film turned out to be so long since the director does not seem to want to miss any detail or emotional reaction from his cast – some scenes may be calm, and others show inner tension, and yet others are unbelievable in their brutality. The transition between those is not altogether smooth, and the film is uneven in quality, but the score from James Horner and the cinematography of Roger Deakins (Blade Runner 2049 (2017), The Shawshank Redemption (1994)) ensure that many elements devised by Perelman actually work well. The cinematography actually reminds of the films of Adrian Lyne (Unfaithful (2002), Indecent Proposal (1993)) and many scenes are hauntingly dreamy.

The House of Sand and Fog is a bit underseen and maybe even underappreciated movie with one unforgettable ending. It is too long and gets melodramatic at times, but this “serious” film also has some amazing acting (Kingsley, Aghdashloo) and is imbued with almost poetic beauty, probably thanks to the work of Deakins (cinematography) and Horner (soundtrack). 8/10