Great stories often owe much to their great villains, and, to that effect, Silver Screenings, Shadows and Satin and Speakeasy have organised this great blogathon “The Great Villain Blogathon” to “celebrate” the villains and their villainy in films. On the face of it, there are many different villains out there. Some are unmistakably “bad”, such as the Wicked Witch of the West in “The Wizard of Oz” (1939), while others may hide beneath the clock of benevolence and do their harm inconspicuously, such as Nurse Ratched in “One Flew Over the Cuckoo’s Nest” (1975). While such antagonists are undeniably present and easy to locate in the film, there may also be others, whose presence is acutely felt by every character in the film, who instil fear and apprehension through their powerful and magnetic personalities, but, who, nevertheless, remain elusive and virtually unknown. One of such characters is Keyser Söze in Bryan Singer’s “The Usual Suspects” (1995). 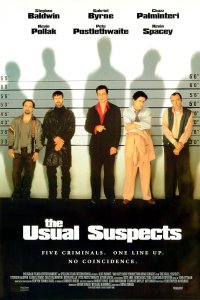 “The greatest trick the Devil ever pulled was convincing the world he did not exist.” (“Verbal” Kint paraphrasing Charles Baudelaire in “The Usual Suspects”)

In 1995, Christopher McQuarrie produced a script which will not only win an Academy Award, but will also be the centre of much talk and speculation for years and years to come. The script is to the film “The Usual Suspects”, a complex and thought-provoking film with a twist, which will later only perhaps be rivalled by “The Sixth Sense” (1999). The story starts with a boat explosion in which multiple bodies and money are discovered, as told by one of the two survivors. This survivor is “Verbal” Kint, a petty conman. He tells the police a story about five criminals or – the usual suspects – who are all brought in to a police station in relation to a hijacking incident. As Kint spills his story, it seems that the mastermind criminal behind everything is one – Keyser Söze, an elusive, almost mythical, criminal.

Now, the character of Keyser Söze deserves a mention in every list of top villains of the past thirty years or so (incidentally, he is consistently ranked among the greatest movie characters ever). In the very first scenes of the movie, he is there, the very definition of ruthlessness, aloofness and control (as related by “Verbal” Kint), capable of unspeakable evil and cunningness. In the film, he is portrayed as a persona of mythical proportions, and parallels are dawn between him and the Devil himself, saying how his thirst for vengeance is legendary and feared by many. At one point, Kint says: “I believe in God, and the only thing that scares me is Keyser Söze”. However, Söze is also so much more than just this notorious and cold-blooded individual. Elusiveness is Keyser Söze’s second name. As initially thought, he is nowhere to be seen in the film, but, paradoxically, he seems to be everywhere anyway, because he seems to be the mind behind every scene. In his tale, Kint refers to Söze’s Turkish and German origins, but he also says: “Nobody believed he was real. Nobody ever saw him or knew anybody that ever worked directly for him…anybody could have worked for Söze.” In that way, the greatest assets of Söze are his intelligence and adaptability, the way he can defy anyone’s perceptions and play on their already formed beliefs. Kint says at one point: “A man can convince anyone he is somebody else, but never himself”; and as Kint, Söze paints this picture of a completely inoffensive, vulnerable individual who has physical deformities and who is afraid of people coming after him. Söze then shifts the attention from himself, Verbal Kint, to others – first, to the other four criminals, then to the mythical criminal legend, and finally, to a “dark horse” Dean Keaton. His adaptability skills show in a way he can make up a story from scratch, or bend reality on a spur of the moment. Hanna M. Roisman, Professor of the Arts and Humanities, says that Kint is like Odysseus who can adapt his personality and his stories to the current audience, for example, adapting his confession to the police’s biases and feelings of superiority. However, like all villains, Söze is also vain, and cannot resist the urge to show off his brilliant mind and prove his superiority to the police, even at the price of the possibility of being caught. Hence, Kint lets himself get caught, rather than escaping after the boat fire.

There are numerous interpretations of the plot, and theories of the true identity of Keyser Söze. However, the above paragraph assumed the most probable and popular theory – that Verbal Kint is Keyser Söze, and that at least some things told by Kint during his police interrogation were true (see clues to Keyser Söze’s identity here). We can even catch Keyser Söze in Verbal Kint way before the final scenes. Although Kint is mellow and unthreatening, the tone of his voice and the manner of speaking as he reads his line in the police round-up of suspects hint of someone totally different. The devil is in the detail, or so they say. In fact, the character of Keyser Söze was modelled on a murderer John List, who killed his entire family and then disappeared for seventeen years without a trace. At first, the character name was Keyser Sume, but because the production had to change it, they came up with Keyser Söze, with “sözel” in Turkish meaning “verbal”.

Of course, the merit of the character Keyser Söze being so well-defined and memorable should also go to Kevin Spacey, who rightly received an Academy Award for portraying this “legendary” figure so perfectly. His performance was so good, his character so intriguing, and the script so perfect, that Keyser Söze now has a mammoth legacy, and now is defined as anyone who is never to be seen, but ever-present and powerful, an elusive enigma of the personality. I personally heard the references to “Keyser Söze” in a court of law. Moreover, the film ensured that young, menacing and dark personalities were again fashionable as villains, and, after this film, it also became popular to include surprise endings in films, as can be seen in such films as “Primal Fear” (1996), “Fight Club” (1999) and “Identity” (2003). Such films may be said to have a “Keyser Söze” effect, as Roger Ebert put it once to reference films which make the audience question everything they watched and demand a second viewing.

Keyser Söze is, undoubtedly, one of the most elusive villains of the 20th century in film; and after twenty-two years since the release of the movie, the character of Keyser Söze still fuels the imagination.

13 thoughts on “The Great Villain Blogathon: Keyser Söze in The Usual Suspects (1995)”