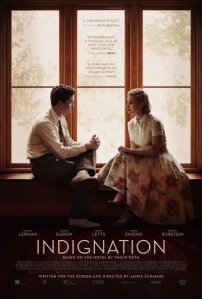 “Indignation” is a directional debut of a screen-writer and producer James Schamus, known for adapting the script of “Crouching Tiger, Hidden Dragon” (2000) and being the producer of “Brokeback Mountain” (2005). Adapting the book by Philip Roth, in “Indignation”, Schamus presents the life of Marcus Messner (Logan Lerman), a bright lad who, while working as a butcher in his father’s store in New Jersey, receives a prestigious scholarship to attend a college in Ohio. What follows is the depiction of Marcus’s troubles of fitting into his new college environment as he simultaneously tries to deal with his socially-unacceptable abhorrence for organised religion and with the confusion of his sexual-awakening. Schamus’s film is a particular kind of a film which is heart-breaking in individual scenes and bitter-sweet in its overall presentation, and the director manages to convey the story masterfully, paying particular attention to the character presentation and dialogue.

“Indignation” premiered at the Sundance Film Festival 2016, and James Schamus went on to be recognised for his work in the film at the Athens and Berlin International Film Festivals. Undoubtedly, we will see more great things coming from the director in future. But, even apart from Schamus’s previous achievements and a masterful execution of this film, Philip Roth’s book itself tells a fascinating story. I have never read the book, and do not know whether the film is faithful to the book, but most of the plot and behind-the-scenes voice narrative must come from the original material. In “Indignation”, we first see Marcus’s humble beginnings in his father’s store and his relationship with his over-concerned parents amidst the Korean war where young lads like him die every day. Marcus then tries to adjust to his new college life, but finds it difficult because his anti-religion sentiments do not sit well with his Jewish roommates or with the college’s compulsory chapel attendance. Amidst all that, Marcus starts to have a crush on one Olivia Hutton (Sarah Gadon), a flirtatious and mysterious girl, spying on her and eventually having an awkward explicit sexual contact with her. Bewildered by her actions and even more confused about himself and his relationship with the world, Marcus plunges deeper into isolation and desperation, especially after hearing about his own family’s imminent break-up. It is interesting to see recent films dealing with the question of religious faith and the hero’s struggles with it, and, apart from “Indignation”, Scorsese’s “Silence” (2016) and Farmiga’s “Higher Ground” (2011) also deal with the subject.

The film is set in 1951, but its themes and topics still feel new because the film explores the well-familiar philosophical issues of societal demands/expectations vs. individual wishes and beliefs. In that way, “Indignation” explores the culture of conformity of 1950s in the US, while emphasising the philosophical conundrums of existentialism. The main character Marcus Messner questions fundamental beliefs, religious values and societal norms. In the film, he explicitly refers to Bertrand Russell and his treatise “Why I am Not a Christian”, but it is easy to picture him reading Camus, Kafka, Sartre, Nietzsche and Orwell. Marcus does not do anything wrong in the film, but his unusual behaviour and beliefs make him the centre of persistent and mounting concern for the college, and the movie succeeds in portraying the inner turmoil of the main character. At one point, Marcus exclaims: “I have a right to socialise or not to socialise with whoever I see fit” and “I am not a rebel or malcontent”. A vision he has of him and Olivia working and kissing in a butcher shop also speaks volumes about what he feels, desiring a quiet humble life away from high societal expectations and his scholarly achievements.

In the film, Marcus is like the protagonist in Camus’ “The Outsider” who refuses to pretend to be someone else to “fit in” in the society; who refuses to change himself even for a second to please others; and who refuses to lie to get himself out of trouble, even though no one will be harmed through this lie. Maybe, he is also the one who is prepared to die for truth, like Meursault in “The Outsider” did. In a way, he could remind one of the zeal and passion of the main character in Hamid’s “The Reluctant Fundamentalist” or of the opinionated couple, the Wheelers, in Yates’ “Revolutionary Road”. In the latter, the Wheelers wanted to break free from the US conformist culture and the strict confines of society they found themselves in. In “The Reluctant Fundamentalist”, the protagonist, a bright graduate student from the Middle East, found himself disillusioned with the “American Dream” and betrayed by those whom he regarded as friends. It is very interesting here that the main characters in “Indignation”, in “Revolutionary Road” and in “The Reluctant Fundamentalist” all make friends with people who are viewed as insane or psychologically unstable by the society and they find common language between them. In “Indignation”, Marcus makes friends with suicidal Olivia; in “Revolutionary Road”, the Wheelers make friends with psychologically unstable John; and in “The Reluctant Fundamentalist”, Changez makes close friends with emotionally fragile Erica.

It is also refreshing to see a film which pays so much attention to its secondary characters, their interaction and the dialogue. Olivia Hutton is only Marcus’s “crush”, but the audience really gets to know her and her side of the story. Marcus and Olivia are like two “misfits” who have found each other. In their own ways, they are both psychologically “damaged” and feel like outsiders on the college campus. Marcus is an outsider because he is an overt atheist; and Olivia is an outsider because she has a history of mental illness and bears the stigma, and because she is sexually promiscuous (see a great movie “Girl, Interrupted” (2000) on that topic). Marcus and Olivia also see in each other what the other lacks. Marcus is sexually repressed and sees in Olivia the sexual liberty he desires. In turn, Olivia sees in Marcus the integrity which she feels she lacks. Sarah Gadon (“Enemy” (2013), “Cosmopolis” (2012)) as Olivia Hutton gives a very convincing performance, bringing a lot to the role and making Olivia memorable. At one point in the film, Olivia is described as “looking like a goddess”, and Hutton fits this dreamy image perfectly. The dialogue sequences throughout the movie are also meaningful, witty and admirably put together, especially that in the Dean’s office where Marcus is subjected to an “informal interrogation” by the Dean. Here, of course, a great deal is probably due to the brilliance of Roth’s narrative. For example, at one point, Marcus replies to the Dean’s comment that praying is done by millions of people with “millions once thought the Earth was flat, sir”. Olivia also says at one point in the film: “Franklin said democracy is like two wolves and a lamb voting on what to have for lunch”.

The non-linear narrative of “Indignation” also makes the film more engaging and interesting to follow. From the very first scenes, the film jumps back and forth in time, showing the memories of Olivia Hutton who is now old and reminiscing. From “Jacob’s Ladder” (1990) to “Atonement” (2007), there are so many films which now employ the same technique, and most of them took it from the respective books’ narratives. Other great things about this film are the soundtrack composed by Jay Wadley and the convincing acting of Linda Emond in the role of Marcus’s mother.

“Indignation” is a very well-made and thought-out film for a debut directional work. However, it also has its very noticeable faults. Firstly, there are instances of the lack of focus throughout the film. The film does not sometimes know what to make the centre of its drama – Marcus’s on-campus issues? His atheism? His relationship with Olivia? His problematic parents? Or, maybe even the Korean War? Secondly, Logan Lerman in the role of Marcus is both a blessing and a curse for the film. In the first half of the film, Lerman’s acting is strained, sometimes downright “poor”, and is even not believable. His face does not immediately strike you as “intellectual” at all. However, in the second half of the film, Lerman redeems himself. His sensitive face becomes ideal to show a tortured soul residing within, and, in his dialogue, the audience perceived a well-read, eloquent and confident speaker.

James Schamus’s “Indignation” is a beautifully-shot and well-acted film which gets better as it goes, and in the end, thanks to its profound characterisation, witty dialogue, non-linear narrative and aesthetic atmosphere, proves to be a moving and satisfying film experience. 8/10