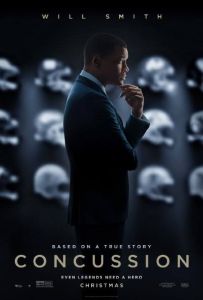 In “Concussion”, Will Smith plays a Nigerian forensic pathologist, Dr. Bennet Omalu, who comes to the US for work, but later becomes the centre of media attention and the big companies’ pursuit when he makes the first discovery of chronic traumatic encephalopathy or CTE. The disease is a football-related brain trauma that is characterized by dizziness, headaches, memory loss and depression, among other symptoms. Far from being acknowledged and praised for his discovery, Dr. Omalu soon sets on a dangerous path fighting for truth and justice for CTE victims as the grand American football establishment tries to put a stop to Dr. Omalu’s experimentations.

It is always very enjoyable to see a film that combines different themes, especially when there is an unusual spin on a sport-story. Sport and economics were combined in “Moneyball” (2011), and now medicine and sport take the stage in “Concussion”. However, although “Concussion” starts strongly and confidently, immediately capturing the attention with its fascinating subject matter and Dr. Omalu’s eccentric autopsy rituals, unfortunately, it wears down pretty soon, and the second half of the film is unimaginative and tedious to watch. This is coupled with the ending that is documentary-like and devoid of any drama.

Will Smith’s performance is convincing and very powerful. Known for his action-oriented roles (“Legend” (2007), “I, Robot” (2004)), in “Concussion” his role is different, taking him beyond the portrayal of your-ordinary-action-hero or even a committed family man in “The Pursuit of Happyness” (2006). In this movie, Smith has to portray an unusual man coming from a different cultural background and a set of moral standards and belief systems (where capitalistic gains and media popularity may be far from the general radar): Dr. Bennet Omalu, who is maybe slightly naïve at times, is committed to justice at whatever cost. Smith does so excellently; his Dr. Bennet Omalu is compelling and forceful, with powerful personality and undeniable magnetism. In a way, Smith’s performance in “Concussion” reminds of Denzel Washington’s performance in Zemeckis’s “Flight” (2012). In both films, we are presented with the man who may sacrifice his own happiness and well being for truth and justice. Also, in both movies, although we are sometimes presented with a thin plot and lack of ideas, what we definitely have is a fascinating character study coupled with outstanding performances.

Regarding the forthcoming Academy Award event, Smith has a decent competition in the category of the Best Actor in the Leading Role. His competition is rumoured to be controlled Michael Fassbender in “Steve Jobs” (2015) and overstrenuous Leonardo DiCaprio in ‘The Revenant” (2015). All this means that even though an Academy Award win may be a long-shot, at least an Academy Award nomination could be considered for Smith. The support cast is also good, consisting of Alec Baldwin, Albert Brooks (“Drive” (2011)), David Morse (“The Green Mile” (1999)) and Gugu Mbatha-Raw (“Belle” (2013)).

Overall, although “Concussion” suffers from weak plot developments in the movie’s second part and an unexciting ending, it is still an important story that needed to be told through film. Thus, the highlights of this film are an interesting story based on real events, as well as Will Smith’s committed performance, making the main character a memorable persona. 7/10