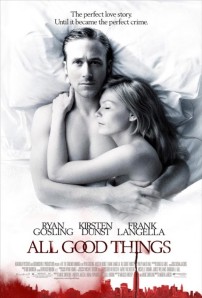 Some say that if you have not heard of a film before and that film has been around for awhile, it cannot possibly be good. Sometimes this is true, but there are exceptions. Directed by Andrew Jarecki and starring Ryan Gosling and Kirsten Dunst, ‘All Good Things’ is a mystery crime drama which has been notoriously criticised fiercely by critics, and which currently holds a 32% rating on the Rotten Tomatoes website, but, probably, quite unjustly. The film begins as it is so ‘in fashion’ nowadays – the main character, David Marks (Ryan Gosling), the heir to a grand real estate business, tells his tale of woe. Beginning with his traumatic childhood and then the conflict with his father and ending with the loss of a girl (Kirsten Dunst) he so dearly loved, the audience is taken through an emotionally intense account of his life events. The main appeal of ‘All Good Things’ is that it is based on a real story, which, on the face of it, is really fascinating. The eerie disappearance of young and beautiful Kathleen Durst in 1982 shook local community, and her husband Robert Durst’s statements to the police were sometimes very contradictory.

Ryan Gosling and Kirsten Dunst give very good performances here. Gosling, whose previous work included ‘Fracture’ (2007) alongside Anthony Hopkins and a romantic film ‘The Notebook’ (2004), clearly demonstrates in “All Good Things” that he is no ‘one-trick-pony’, and, in fact, is capable of handling brilliantly a wide variety of roles, where his characters’ personalities are very complicated to say the least. Dunst also fits perfectly the role of David Marks’s sweetheart. Clever and innocent, Dunst almost reproduces the spirit of a young girl from ‘The Virgin Suicides’ (1999) in her portrayal of Katie Marks at the beginning of the movie, only to ‘gain’ enough maturity and experience at the end of story to almost rival her recent role in ‘Melancholia’ (2011). The chemistry between Gosling and Dunst in this movie is also very good.

The director’s work, however, can be criticised somewhat, although the main fault lies with the script. For example, more attention should have been accorded to the nature of a psychiatric disorder Gosling’s character is suffering from. The needless confusion and ambiguity surrounding the film’s premise also makes it rather tiresome to watch, and the fact that the film is too long only exacerbates the problem. The movie title could have been more to the point as well: ‘All Good Things’ accentuates this romanticised version of the story as it was the name of the first shop which the young couple in the film bought to make their living in the country. This provides a wrong picture. Although a too-predictable script could be forgiven, ‘All Good Things’ also suffers from indecisiveness regarding its classification and purpose. The film could be divided into two parts, and the line of division is where the real ‘twist’ to the story actually happens. Although ‘the twist’ is perfectly executed, the film could have just ended right there and, maybe, some would have thought it ‘great’, as everything that happens next is just a slide down in terms of interest.

However, the film is not as bad as critics paint it to be: apart from great acting and an intriguing story to back it up, there are some nice emotionally intense scenes which just have to be watched, and the music is also a delight. ‘All Good Things’ can still be described as ‘A Perfect Murder’ (1998) or ‘Sleeping with the Enemy’ (1991) of the 00s decade. It falls into an all-familiar, ‘too-many-clichés’ pit from which few films with such ambiguous scenarios can escape from unscratched and with relative success. Both ‘Sleeping with the Enemy’ and ‘A Perfect Murder’ are great for one-night entertainment, but, because these films are filled with too-many-familiar scenes and lines, they are too tiresome too watch second time around (if, of course, you can manage to seat through your first viewing without falling asleep).

Intense and somewhat disturbing, ‘All Good Things’ stands tall on the basis of its actors’ performances and the air of mystery surrounding the actual story. Although these things sometimes can pull any film from a gutter, in this case, they were not quite sufficient. There was definitely inability to connect different plot lines together and make this movie more complete. 5/10

5 thoughts on ““All Good Things” Review”

The image used in the site header is a shot from the film Sleepy Hollow [1999] by Tim Burton.

A writer and her reading.

Traditional, Artsy, Genre-Within-Genre: A Little Something for Everyone

One Movie at a Time

One man. Millions of movies.

Reflecting on Mecha Anime, myself, the fandom, and other Anime