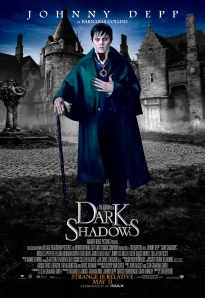 Tim Burton’s new film ‘Dark Shadows’ is a condensed version of the US TV series ‘Dark Shadows’, aired between 1966 and 1971. The year is 1790, and the plot centres on Barnabos Collins (Johnny Depp), the master of Collinwood Manor, and a rich and powerful son of Joshua and Naomi Collins. Barnabos has the misfortune of crossing his ex-lover Angelique Bouchard (Eva Green), a witch, who turns her witchcraft skill against him, burying him alive, killing her new lover and cursing his whole family. However, in the 1970s, Barnabos is accidentally freed from his tomb only to find his present family in ruins. Barnabos then promises his family the return of their lost fortune.

‘Dark Shadows’ marks the 8th collaboration between Johnny Depp and Tim Burton, but, it seems to be the least successful one. ‘Edward the Scissorhands’ (1990), ‘Charlie and the Chocolate Factory’ (2005), and ‘Alice in Wonderland’ (2010) all saw Depp in one of his comfort zones, playing eccentric characters in the films, which are well-structured, appropriately-themed and well-paced. The collaboration of Depp and Burton in “Sleepy Hollow“ (1999) had a different twist. The film is a horror mystery, which is beautifully shot, and largely captivates because of its gothic appeal. ‘Sweeney Todd’ (2007) is also a dark and serious movie, with Depp portraying the solemn maniac realistically. So far so good…and then we arrive at ‘Dark Shadows’. This film tries to combine the two genres Burton and Depp have been involved ever since: comedy and horror. The result is supposed to be a great movie, but, instead, what we get is a quite annoying, chaotic and confused plot; total uncertainty about the characters’ aims and personalities, and the inappropriate use of humour.

Burton’s earlier films also remain, at least in my opinion, among his best work to date. Among those are ‘Beetlejuice’ (1988) and ‘Batman Returns’ (1992). ‘Beetlejuice’ is similar to ‘Dark Shadows’ in that it has references to the dark arts and death, which are presented in a humorous way. However, unlike ‘Dark Shadows‘, ‘Beeltejuice’ works because it does not try to do/be many things at once; it is a film with a straightforward plot which is easy to follow. Moreover, the viewers get to know all the characters in ‘Beetlejuice’ relatively well, i.e. their personalities are ‘opened’. This is exactly what ‘Dark Shadows’ does not do well, with Depp working alone to keep the audience on track as to what is going on. ‘Dark Shadows’ plot, which, incidentally, has many sub-plots and unrelated events, is so over-the-top and rushed, it can cause dizziness. Perhaps ‘the less is more’ approach was the correct one to take, after all.

Having said that, ‘Dark Shadows’ starts well, making  the audience to anticipate an interesting plot, full of clever twists and romance. When beautiful Victoria Winters (Bella Heathcote), the new governess of Collinwood Manor, arrives at the house, mysteriously concealing her real name from everyone, the film appears more like an exciting beginning of Agatha Christie’s murder-mystery. However, Victoria’s story and her romantic involvement with Barnabos is never fully explored, and is actually abandoned half-way through the movie to concentrate again and again on Barnabos’ tiresome and nonsensical war with Angelique Bouchard. This is a pity. In fact, the film’s mishmash makes one stop carrying about the film characters the moment one sees them. For example, the mistress of the Collins estate, Elizabeth Collins (Michelle Pfeiffer) has definitely many secrets to unveil, but, unfortunately, she is never given the opportunity to do so because of the lame script. With the film itself not knowing what it actually is or supposed to be and with its themes stretching from ‘Back to the Future’ (1985) to ‘Twilight’ (2008), it has zero to little chance of realising its full potential. Johnny Depp’s inspiring acting, visually beautiful scenes and amazing soundtrack just about make-up for the film’s many faults.

Even taking into account the fiction behind the film’s story and purposeful fun elements of it, one can still wonder how anyone is capable of producing something so chaotic, absurd and unwatchable (yes, even if it does come from Tim Burton himself). For example, we have Angelique Bouchard, an evil witch, who practically murders Barnabos’ sweetheart, the beautiful Josette du Pres, ruins and curses his family, taking complete control of the family business, turns Barnabos into a vampire, sets the whole town against him and imprisons him in a casket for nearly 200 years. However, after freeing himself, Barnabos thinks of nothing better to do than to have a passionate romance with the same witch. And, the amazement does not stop there. Although at times astute, the humour used in ‘Dark Shadows’ is often completely misplaced. There is a scene in the film where it is strongly implied that Dr. Julia Hoffman (Helena Bonham Carter), a psychologist, performs oral sex on Barnabos – and this is supposed to be a family film with 12A rating (UK). That scene was simply done in a worst taste possible.

Overall, although ‘Dark Shadows’ is visually stunning and entertaining, it is also awfully-paced and messy. The mix of different themes and sub-plots in this film produces a tasteless concoction of big disappointment. 4/10