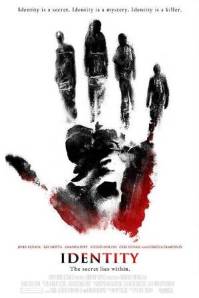 “As I was walking up the stairs, I met a man who wasn’t there. He wasn’t there again today; I wish, I wish he’d go away.”

Ten strangers: a family of three, a limo driver, a film star, a call girl, a police officer, a convict and a troubled newly-wed couple, get stranded at a remote motel in the Nevada desert on a stormy night. Each of them has a dark secret to hide. When gruesome murders begin to take place at the motel, and the newcomers are killed one by one in a sinister fashion, they soon realise that their encounter is less coincidental than they might have originally assumed. In the background to these events, there is also a post-conviction death penalty meeting taking place, the centre of which is a man called Malcolm Rivers, a mentally-disturbed serial killer. Although at first the movie may appear confusing, all the movie events inevitably lead to a logical, well thought-out and fascinating finale.

Directed by James Mangold (‘Girl, Interrupted’ (1999)), (‘Kate & Leopold‘ (2001)), ‘Identity’ is a gripping murder-mystery with unexpected turns and an unforgettable twisted ending. Borrowing from Agatha Christie’s ‘And Then There Were None’, Michael Cooney (‘Jack Frost’ (1997)) wrote a perfect film script, which intelligence, intricacies and complexities can be compared to those found in ‘The Usual Suspects’ (1995) or ‘Memento’ (2000). The film is more thought-provoking than it seems on the first glance. At the beginning, the film introduces each character in a “flashback” style (almost like a thought or a piece of memory in a mind), giving the audience just enough information on each of the characters to be able to process the film’s later events logically and coherently. Mangold (the director) keeps all ten characters “active”, never forgetting any of them as the movie goes on. The movie also employs clever imaginative event structures, which make the movie-watching even more of a sinister experience than it already is. For example, there is a scene where a prisoner is running away from the motel, only to find himself arriving to it. This is a very clever idea to employ and reinforces the idea that the motel boundaries are never to be breached. The film’s narrative itself is also ingenuous with all events and characters inexplicably connected to each other. According to the director, ‘Identity’ is also a film-noir, portraying wet streets, mercury lights and men in trench coats.

As a “single-location” movie, ‘Identity’ is superb. Recently, a number of films have been made in that style, most notably Polanski’s ‘Carnage’ (2011) and Cortes’s ‘Buried’ (2010). James Mangold stated that he directed a film about “a group of strangers who find themselves trapped within a single locale and forced to confront some kind of a dark secret”. This statement sums-up the movie perfectly. Since ‘Devil’ (2010)’s release, ‘Identity’ is also probably best compared to that movie. ‘Identity’ seems to be more intelligent and complex than ‘Devil’, because the movie is not based on supernatural explanations, and ‘Identity’s intelligent plot is far more intriguing. However, ‘Devil’s ending is more unexpected than that found in ‘Identity’, and can even be compared to the ending found in ‘The Sixth’s Sense’ (1999).

‘Identity’ provides an interesting insight into one of the most misunderstood of all mental illnesses: multiple personality disorder. This rare condition is diagnosed when a person’s mind develops other personalities, and they can be of different sex, race, intelligence and social background, but also may have a different heart-rate, body temperature and, obviously, hand-writings and opinions from that of the “host”/main personality. Usually the disorder develops as a result of some extremely traumatic event(s) happening in the past, and personalities emerge as a “defence” mechanism to protect a person’s psyche from having to deal with these horrific events and unpleasant memories. As it is such a fascinating topic, there have been many films dealing with this mental disorder, such as ‘The Three Faces of Eve’ (1957), ‘Primal Fear’ (1996) and ‘Fight Club’ (1999). However, ‘Identity’, arguably, goes further than these films in showing the capabilities and consequences of someone living with such an illness. For example, the movie portrays the versatility of the disorder, and displays accurately the disorder as a condition – each of the personalities usually believe that they have this rich, fully-fledged life, containing the past, present, but also filled with feelings, emotions and plans, which may be completely different from the main personality. This is, in fact, the main premise of ‘Identity’.

The cast is just great in the film, giving very good performances, especially John Cusack (‘Being John Malcovich’ (1999)) who is great as humble and reliable Edward, a limo driver; and Ray Liotta (‘Field of Dreams’(1989)) who is also good as Officer Rhodes. Clea Duvall (‘Girl Interrupted’), John Hawkes (‘The Perfect Storm’ (2000)) and Alfred Molina (‘Chocolat’ (2000)) are also all equally noticeable.

Overall, ‘Identity‘ is a brilliant, gripping, suspenseful thriller; a real brain-teaser, which is both deliciously claustrophobic and beautifully haunting. 9/10

So, what really happened in ‘Identity’? Malcolm Rivers, a serial killer, is suffering from multiple personality disorder. It seems that all eleven strangers (including the hotel manager) trapped in the motel are personalities living inside Malcolm Rivers’s mind (presented as the little boy in the motel setting). These people were created by Malcolm, and were named after states, e.g., Paris Nevada. They also all share the same birthday, 10th May. Therefore, what happens in the motel is not actually real, but rather the internal process going on in Malcolm Rivers’s disturbed mind as he drives to his execution hearing. As Rivers’s medication, designed to reduce his personalities, starts to have a profound effect on his mind, one of the personalities starts to kill all the others, i.e., strangers in the motel. In Malcolm’s mind this process of the “personalities’ reduction” takes the form of the “motel murders”. In the director’s words “motel represents …psychic encasement of the different fractured personalities living inside Malcolm Rivers”.

At some point during the film Edward (John Cusack) learns that he is just one of the personalities in Malcolm’s head. Equipped with this knowledge, Edward is on the mission: to make sure that the murderer-personality is killed, and an innocent personality survives. Here, there is also a theme of “existential loneliness” as Edward comprehends the whole meaninglessness of his own existence within another person, and confronts the fact that his whole life is just an illusion.

The question then becomes – who was the real killer who committed the gruesome murders? It appears it was a little boy – Timothy York (Bret Loehr), and the personalities, which he later killed, including Paris Nevada, were “innocent”. Therefore, as only Malcolm Rivers, the killer, remained, he should have been put to death. He was not, however, because psychiatrists thought that the only one remaining personality was that of Paris Nevada.

The film has one major drawback, and the problem may lie with the script. There is a scene in the film where Timothy leaves the living room to go to the adjoined room, where his injured mother sleeps. After a moment, Timothy returns to the living room, and it subsequently transpires that his mother is dead. Now…this scene is too obvious and has the danger of giving out the entire plot, i.e., that Timothy is, in fact, the murderer. Arguably, without this scene, it would have been impossible to guess who the true murderer really was, until the very end.

For my list of top 20 most intelligent and thought-provoking films, see here.